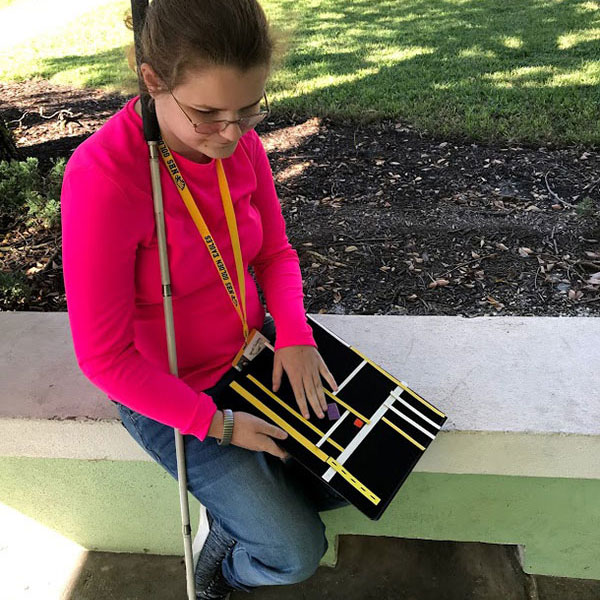 Our Transition Program serves children ages 14 through 24.  This program is highly focused on job readiness and independent living skills, with the goal of preparing the students for life after high school.  These services are crucial to successful post-secondary transition and gaining meaningful competitive employment.

We also offer an annual transition summer camp, as well as annual work-based learning experiences where students are provided with real on-the-job- training.

Whether, working as a TVI in the schools or as a CVRT in an agency (such as the Lighthouse), vision specialists have the unique privilege of following their students’/clients’ growth and successes over a long period of time, sometimes throughout their entire educational career! This is a story about one such young man (“Wyatt”) who has been a Lighthouse client (off and on) since he was in 6th grade.

Wyatt is currently 21 with a progressive eye condition, Retinitis Pigmentosa.  This month, Wyatt enrolled in classes at a local college and will take his first steps toward his college career. To achieve this point, Wyatt took the road less traveled- with extra turns, valleys and hills.  However, he successfully reached this important mile marker and is on a path to success!

Wyatt’s school career has been anything but traditional. In elementary school Wyatt was never identified as having a vision impairment. Without receiving the extra support from a Teacher of the Visually Impaired and IEP accommodations, Wyatt struggled in school. In middle school, his vision impairment was eventually discovered, but he was also a shy, quiet young man; which made the traditional school setting even more challenging.  As a result, Wyatt spent his remaining school years in and out of virtual education programs and at home.

However, fast forward to age 19, Wyatt matured and overcame his anxiety-related issues with school. He enrolled in a GED class and set in motion a new path to success.  He buckled down, studied for the GED and within a year obtained his GED. Immediately afterwards, he began studying for the SAT college entrance exam.

While studying to pass the SAT exam, Wyatt contacted the Lighthouse to request mobility training. As a person with night-blindness and field loss, Wyatt knew he would need skills to navigate an unfamiliar school campus. At this point, Wyatt was a very determined young man and reliably showed up every Tuesday in downtown Naples (for three months) to complete the training.

Also, during this time, Wyatt contacted the College Board to advocate for special testing accommodations (i.e. use of video magnifier) for the SAT.  He was eventually approved and passed the SAT test. Having not attended a typical brick and mortar school since middle school, this was no small feat!

After securing his option to enter college, Wyatt took steps to explore career and school options. As a part of his research, Wyatt visited a local technical college and met with the Marine Mechanics professor.  He also met and interviewed two Lighthouse clients who worked in careers of his interest.  Wyatt asked the clients (one a retired chemist, the other with a degree in Environmental Sciences), very thoughtful questions about: their specific job tasks, accommodation options and possible career challenges as a visually impaired person. Thus, with a now solid career goal in mind, Wyatt decided to pursue his original goal of becoming a chemist and enrolled in a nearby college.

Next, Wyatt met with the Director of the Office of Adaptive Services. She assigned Wyatt with multiple tasks for enrollment. As a newly determined student, Wyatt quickly completed the tasks and proved that he can advocate for his needs, follow-through and take initiative. Wyatt is now enrolled at a college and recently began his first three college classes!

Over the past few years, I have observed Wyatt mature and gain confidence in himself and his abilities. As his instructor, I have no doubt that Wyatt is capable of meeting his goal to become a chemist. Good things are in Wyatt’s future!