Skip to content
Home » About Us » Stories » Meet Joe

Joe is a 91-year-old man losing his vision from dry macular degeneration. For more than two years, he has been a regular participant in the Thursday afternoon support group at the Lighthouse. He reported that hearing his fellow group members talk about how much they are doing with voiceover and JAWS, a screen reading program, inspired him to learn. He went out and got himself an iPhone and an authorization to run JAWS on his laptop.

Joe’s goal then became to learn enough about the iPhone to download books from the free National Library Service offered through the Library of Congress, read his email, and learn how to use independence apps for the blind and visually impaired. He also wanted to use JAWS to help him continue banking and paying his bills online.

Since he began coming to the Lighthouse for lessons, he has learned how to navigate the National Library Service website to download books and magazines, read email, and use the voice memo app on his phone to input and retrieve audio messages. He is also well on his way to independently maneuvering through his bank website on his computer using JAWS.

Joe takes learning very seriously. He works hard and learns something new during every lesson. Joe once commented, “I know I am old, but I’m not dead. I still have a few functioning brain cells that allow me to learn new ways to stay independent.” He credited his group for inspiring him and giving him the courage to never give up. 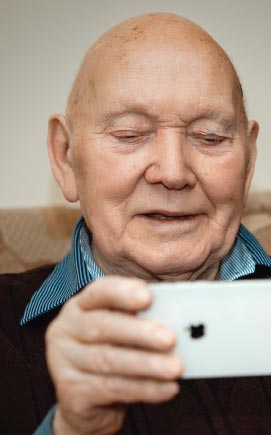